The legendary Rodney Marsh has a message for all the Rowdies doubters.

The Rowdies might currently be down, but they’re certainly not out yet. And most importantly, they’re still our Rowdies and they need our unwavering support as they try to right the ship.

Saturday night’s Coastal Cup finale may be the most important game so far between the Rowdies and Strikers in the modern NASL era. Both teams are in desperate need of a win to stay alive for the hunt to clinch a spot in The Championship, the NASL’s four team playoff tournament. On top of that, Fort Lauderdale has its best shot at winning the Coastal Cup since its conception. All they have to do is win or draw. Only an outright Rowdies win can keep the Cup in Tampa Bay for a fifth straight year. The good news for Rowdies fans is that in nine attempts the Strikers have failed to secure a single point at Al Lang Stadium. The Rowdies waterfront home hasn’t been much of a fortress this season, but the club can still hang its hat on not falling to the Strikers in St Petersburg.

To keep that streak going Tampa Bay will need to be score some goals. They have been shut out in their previous two matches. The distribution and service from the midfield will need to improve drastically to remedy the scoring drought. Along with that, Georgi Hristov and whoever Ricky Hill decides to start up top with him will have to create better separation between themselves and Fort Lauderdale’s back line to earn more substantial chances.

On the defensive side it’s vital that the Rowdies stay organized throughout the match. Strikers forward Fafa Picault, who was with the Rowdies in back in 2012, is a dangerous threat on the counter and is more than capable of stealing one against the run of play. Fafa was only 21 when he was with the Rowdies, and showed some potential in his one season. But he was a very raw talent and struggled to translate his talent into any goals. Fafa has seemingly come into his own with the Strikers, scoring 9 goals so far this year. A key player to watch on the Rowdies back line is Anthony Wallace. The left back isn’t afraid to move up the flank and get involved in the attack, which means he can occasionally get caught out of position on the counter. Center backs Tam and JP Rodrigues will need to be ready to cover for him all night and squash the potentially lethal Strikers attack.

The Cup Finale will also serve as Sons of Pirates night for Ralph’s Mob. So be sure to wear Mob pirate gear at the match. But really any pirate related regalia, preferably with black and yellow will suffice. Go crazy.

You can catch Unused Substitutes hosts Matt and Dan living the vagabond lifestyle, wandering around downtown St Pete well before the match. They will either be drinking to celebrate or lament  their Liverpool’s morning result in the Merseyside derby. So say hello, and feel free to mock or commiserate with  them. Dealer’s choice. Just remember Saturday night belongs to the Rowdies.

Keep track of where the Unused Subs hosts are pre-gaming by following along on twitter at @UnusedSubsPod. Or if you’re feeling cocky send along your game day predictions. Retweets and banter will be had by all. 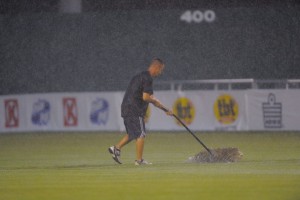