It’s only been a few weeks since these teams last met, and all of the points that Jake made in his week 4 preview (link) are still valid. The Rowdies will no doubt have taken note of New York’s comeback last week, scoring 3 goals in the last 30 minutes, and will hope their recent success on the counter-attack combined with their late-game fitness and depth will serve them well. Since Week 4, the Strikers have collected a total of 1 point from 9 available, losing 2-0 at the Cosmos, 2-1 at Atlanta, then throwing away a 3-0 lead and 2 points at home last weekend to New York. The draw will be especially bittersweet as the Strikers looked set to be the second Florida side to conquer the Cosmos, and they would have done it without the services of forward Stefano Pinho, midfielder James Marcelin, and defender Karsten Smith, all of whom were serving red card suspensions from the Atlanta match. All 3, plus newcomer Hendry Thomas who played 90 minutes in the defensive midfield role last week, will be available for selection this weekend. Listed as injured for this match are M Christian Blandon; GK David Meves; GK Joe Nasco and D Daniel Navarro.

What to watch for: 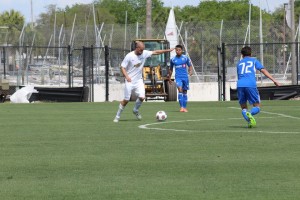