After exhaustive research (google) the Unused Substitutes have unearthed a preview that ran in the, at the time, St. Petersburg Times the day of the first official game between the Tampa Bay Rowdies and Fort Lauderdale Strikers on May 7,1977.The original NASL Strikers started out as the Miami Gatos in 1972. In 1973 they re-branded themselves the Torros, which they played as for four seasons. For the 1977 season the organization came to their senses and got the heck out Miami and moved up to Fort Lauderdale to finally become the team that every Rowdies fan loves to beat up on.

The St Petersburg  Times preview isn’t in an in-depth tactical breakdown. Ken Blankenship, the writer gives the impression that the Rowdies front office was heavily promoting the Rowdies-Strikers as a big rivalry before the teams have faced off on the field. Blankenship wasn’t buying into the hype machine yet and spends most of the preview pointing out the high intensity that true rivalries have in “soccer-rich” countries. The preview is worth a read through simply for former Rowdies coach Eddie Formani’s amusing anecdote about the mourning involved in losing a bitter rivalry match. If fans in Tampa Bay adopted the mourning ritual mentioned, consisting of coffins, assorted produce and women’s underwear it might be even harder to convince St Pete to commit to a shiny new stadium for the Rowdies.

Interestingly, this feels like the type of coverage you could expect from all of media outlets in 2014. The claims of soccer’s “potential” but “over-hyped” growth persisted in the days of the old NASL and they still do today. Blankenship’s frustration with the soccer hype machine is on display with his use of quotation marks and italics every time the phrase “heated rivalry” appears in the preview. A rivalry is many things to many different people so let’s not worry about if the Rowdies and Strikers have lived up to other famous rivalries around the world. You can define it for yourself however you want, but it is hard to deny that a match up between the Rowdies and Strikers occupies a unique spot in American soccer. The Pacific Northwest and Florida are the only two regions that can claim to be carrying on rivalries with actual history behind them.

You can read the entire preview below or by following the link http://news.google.com/newspapers?id=XGEqAAAAIBAJ&sjid=nl0DAAAAIBAJ&pg=2081%2C6099879

Oh, and just so we’re all clear, the Rowdies won that first official match against the Strikers 1-0, in front of 25,000 fans at Tampa Stadium.

Rowdies-Strikers: not yet a heated rivalry

Tonight’s North American Soccer League shin-splitter at Tampa Stadium is being billed as a “heated rivalry,” and has been dubbed the “Florida Derby” by crowd-conscious Tampa Bay Rowdies management.

And it may develop into a “heated rivalry” once the 8 o’clock kickoff against the Fort Lauderdale Strikers has been taken and shoulder bumps, elbows to the ribs and kicks to the ankles are well underway. But not until then.

“A rivalry is a game against somebody you really hate. I don’t think any of us really hates Fort Lauderdale yet,’ said Rowdies goalkeeper Paul Hammond following Friday’s tuneup training session. “But I’ll tell you after the game if we do.”

The Rowdies-Strikers struggle is indeed a showdown for first place in the NASL’s East Division, but it us only the fifth game – for both teams – of a 26-game regular season.

The Rowdies are 3-1, with a pair of impressive home victories plus a well-earned road victory, and are solid favorites despite the pre-game buildup of a toe-to-toe slugfest. Fort Lauderdale, revamped and revitalized from when it was the Miami Toros with a 6-18 record, are 4-0. Yet the Strikers have yet to play away from home, and this is their first venture into hostile environs.

Because of the “heated rivalry” between the Rowdies and Strikers, a throng of more than 25,000 is expected, with both sides of Tampa Stadium thrown open to accommodate.

Tampa Bay head coach Eddie Firmani knows well of “heated rivalries“, and can tell you tonight’s tiff is nothing more than shaking hands compared to some he’s been onvolved with.

Sure, the Rowdies and Strikers eventually will develop a well-founded dislike for each other, but each team is approaching this contest with little more apprehension and caution than any ither.

“You still want to win. It’s nice to shake hands with the losers,” said Firmani. ” But when I was playing, you just didn’t lose your “derby” game.”

In the English League, as well as in Italy, South Africa and other soccer-rich countries, traditional games with close-by teams are “derbies.” The bulk of Firmani’s playing career was spent in Italy, with teams such as Genoa, Sampodoria and Inter-Milan. “Over there, you have two big teams sharing the same stadium in one city,” said Firmani. “Like Torino and Juventus in Turin, Roma and Lazio in Rome, Genoa and Sampodoria in Genoa, and Inter-Milan and Milan in Milan.

“And you just didn’t lose your derby game. After the game, the townspeople would carry a coffin through the streets, draped with the colors of the losing team, and they would be singing and moaning through town. The coffin would be heaped up with cabbages, carrots, greens and fruits and lit candles. And in the middle of town, from one office (building) to another, they would hang up bloomers (women’s underwear) with the colors of the losing team.

“If you were on the losing side in a derby game, you didn’t go out at night. You just stayed and ate at home that night,” said Firmani.

The Rowdies-Strikers match isn’t yet a heart-stopper for the rest of the Rowdies crew yet, either.

For Hammond, midfielder Mark Lindsay and defender Stewart Jump – all formerly or currently with Crystal palace of the English League – it’s not quite as intense as a clash with Chelsea or Millwall.

And it’s unlikely any Rowdies-Strikers kickfest could excite Rowdie midfielder Rodney Marsh once he’d taken part in a classic English “derby” between his Manchester City lads and hated Manchester United.

South African defender Mike Connell has played in his share of “heated rivalries” while with Johannesburg Rangers. “Our big rival was Highlands Park, and we always got big crowds for that game,” said Connell.

Team captain and midfielder Lenny Glover is familiar with “heated rivalries” after many years in the English League with Leicester City. “We had a couple – with Coventry, Birmingham and West Bromwich Albion. They were all sort of close together in the midlands,” said Glover. “But they weren’t all big games – only when both teams were at the top, or both at the bottom fighting for points to avoid relegation.”

Tomorrow (Saturday) we’ll begin to feel a little tension about this game. When we run out on the field, and our supporters yell for us. That gets the ol’ heart pounding,” Glover added.

Bothe teams are at the top, and there will be 25,000 sets of lungs in action tonight. So the Strikers-Rowdies shoot-out may indeed, grow into a “heated rivalry.” 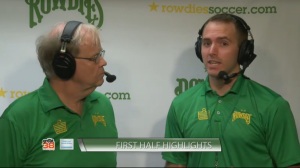